Javascript is undeniably the future of web development. It is responsible for 95% of web applications. However, it was solely used for front-end components until 2009. The entire web development process was transformed when Node.js was released. Node allows developers to write both backend and frontend in the same language, bringing code simplicity to a new level.

Developers working on full-stack web application development projects can gain a lot from combining these two technologies. Let’s look at how React and Node work together in building enterprise web apps that are easy to maintain over time.

Node.js is a JavaScript run-time environment based on Google Chrome’s virtual machines (VMs), which were created to allow developers to create fast and scalable network applications. It is lightweight and efficient because it uses an event-driven non-blocking I/O mechanism.

Node.js also allows users to construct front-end and back-end web apps using JavaScript. It has numerous advantages for firms who want to write server and client-side code in the same language.

Node.js offers a ton of benefits when it comes to your business apps.

It is lightweight with low runtime requirements, which means the same servers can now handle more work with greater efficiency. In terms of enterprise benefits, it translates to savings on infrastructure costs. Node.js also reduces expenditures on Virtual Machines, Web Server Hosting, and Local Servers needed in running apps.

Node.js promises reduced load times of below 3 seconds due to asynchronous loading. This means that only the section of the website that the user sees loads initially, with the remainder loading later to save time. According to a Google analysis, 53% of visitors exit mobile sites that take longer than 3 seconds to load. Slow websites will eventually cost you more in terms of design and development but will provide a low return on investment.

Companies have boosted their scalability up to 10 times with Node. It is easy to combine with other technologies and follows the microservices architecture.

Node.js is one of the top five easiest languages to learn for server-side scripting, according to Freelancing Gig. A developer may code the complete website from front to back using the same languages, which have a smaller learning curve. Other languages, such as PHP or Python, make this extremely difficult. Developers spend less time constructing apps in Javascript-based environments since coding is more manageable, allowing organizations to save money on development schedules.

What is React Native?

React Native has key advantages when it comes to creating enterprise apps.

React is easier to learn and create because it is a Native Javascript library. The software also includes a number of reusable components that make designing React User Interfaces considerably easier.

The ability to create Interactive UI elements that work as Progressive Web Apps (PWAs) on mobile phones is crucial for using React for front-end development. Services such as Profound Logic’s Profound UI can help with this. PWAs have been around for a while, but their full implementation is being achieved with React, allowing developers to provide consumers with mobile-app-like functionality on a mobile website. Not only is it responsive, but it’s also performance-optimized.

Developers can use React to code the desktop version while working on the mobile site. React allows users to build for numerous platforms at the same time while maintaining the same codebase. It also improves the framework’s usability, allowing businesses to create applications that are optimized for several platforms at the same time. Web apps, mobile apps, and desktop apps are all supported by React.js. When it comes to integrating with other technologies, the Javascript component is exceptionally flexible.

React Native’s relative library, React.js, is one of the significant advances provided by the framework. Developers can compile HTML, CSS, and Javascript files directly into platform-native code, making React Native an excellent choice for mobile application development. This allows a developer to create mobile apps without learning platform-specific programming languages. Everything is taken care of by Javascript.

Combining a Node Backend and a React Frontend

Here is why it is beneficial to use both technologies in enterprise app development.

You can achieve a good return on investment (ROI) and save time and money using these two technologies. They work well together to give an effective framework for constructing high-performance enterprise web apps that are simple to maintain over time.

Developers can use React Native and Node.js to build massive web apps with dynamic, data-driven views that are responsive across devices. Doing so is highly recommended when working on large projects where your enterprise app will get a ton of traffic. Moreover, you need scalability to keep everything running smoothly.

Node.js is ideal for real-time data applications because of its event-driven architecture. When React Native is employed, it is simple to construct durable applications that can handle massive quantities of traffic.

The use of Node and React results in high-performance apps. Both have a lightweight and efficient event-driven, non-blocking I/O model. Using both, you can create powerful applications without worrying about slow response times or page load times.

Profound Logic’s solution, Profound.js, is a low-code solution that is built specifically for developers and utilities Javascript and Node.js. With Profound.js, you can easily make your own mobile app with no hassle or fuss.

5. Simple use of one language

Developers do not need to learn complex back-end languages like Ruby or Python with both technologies. As a result, it saves time, money, and resources by not moving between multiple programming languages and frameworks.

Profound.js is a low-code, JavaScript/Node.js solution that runs on all platforms (including IBM i) and is built specifically for developers. It is the first true, low-code platform to run natively on IBM i, with full RPG/DB2 integration, helping companies on IBM i move into the future without losing years of IT investment. Increase the speed of application development by 10x today.

Benefits of using Profound.js include:

Try Profound.js today! Want to learn more about how Profound.js can help your company? Contact us at 877-224-7768 or email us at sales@profoundlogic.com. The Importance of API Security to Protect Sensitive Business Data 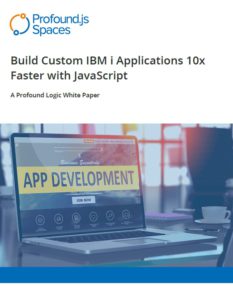 Digital Transformation: The Value of Legacy Code & When to Move On