Jürgen Finger, head of the central IT department at Hörmann, noticed a “generational change” in technology happening and his company’s long-standing, core applications weren’t keeping up. Finger realized he needed to supplement his existing RPG programs with modern languages like JavaScript and Node.js. In the autumn of 2017, he and his development staff met with Profound Logic German partners Task Force IT to figure out how to do exactly that.

The Need for Modern Development Tools

At Hörmann KG Werne, an application package that has been tried and tested for many years is in use on IBM i, which is maintained at its core by the company’s own developers under RPG. A total of three developers and the head of DV/ORG are in the central IT department.

Mr. Jürgen Finger, head of the department, joined Task Force IT-Consulting GmbH in Dortmund in Autumn 2017 to find out about modern development tools. The focus was clearly on the topic of generational change, which should be solved by new technologies. At the same time, they wanted to find a way to supplement existing RPG programs with modern programming languages such as JavaScript.

After the first live presentations from Task Force, it quickly became clear which direction the new strategy could take at Hörmann. Task Force, the Profound Logic partner in the German-speaking market, put together a development package to help both the older RPG developers with their daily work and to enable the integration of new modern development environments.

Since Task Force has a lot of know-how for such problem situations, which have already proven themselves very well with other customers in the past, the solution had to be clearly defined and implemented quickly.

Task Force, the Profound Logic partner in the German-speaking market, put together a development package to help both the older RPG developers with their daily work and to enable the integration of new modern development environments.

The first step to modernize Hörmann’s development environment was the integration of the in-house change management system: CMOne, the flagship product of Task Force-IT. After installation, Hörmann’s existing applications were configured together with the client. Thanks to the CMOne integration report, existing problem situations in the current environment were quickly identified and resolved.

The training of the developers was conducted directly on the client system at Hörmann, so that the colleagues immediately found themselves in a familiar environment with CMOne. Directly after the training, the development was carried out exclusively with CMOne, which erased the misconceptions that IBM i was old and cumbersome. All developers settled in very quickly to the new development environment under RDi and the advantages of working with CMOne were very well received. After just a few days, Hörmann realized that a great deal of time had been saved in their daily work, which can now be used for the actual development. 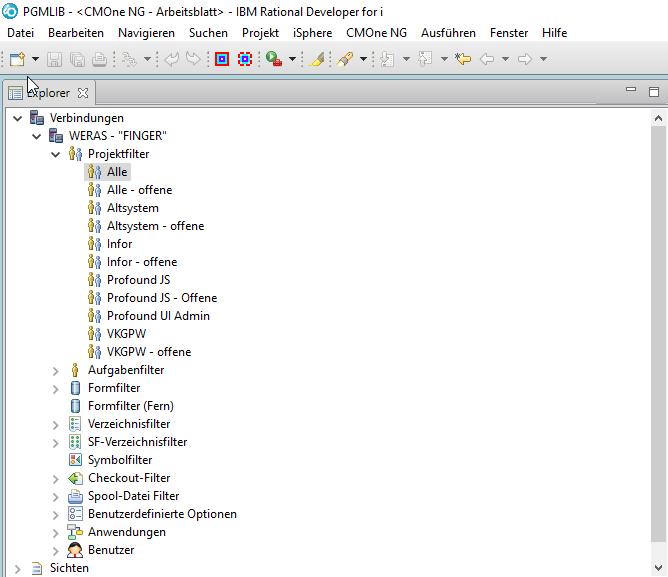 The second step was to integrate a modern user interface. Task Force implemented Profound UI by Profound Logic. Using Genie, which is a component of Profound UI, a skin was created for the browser-based output of the 5250 data stream and customized according to Hörmann’s look and feel: 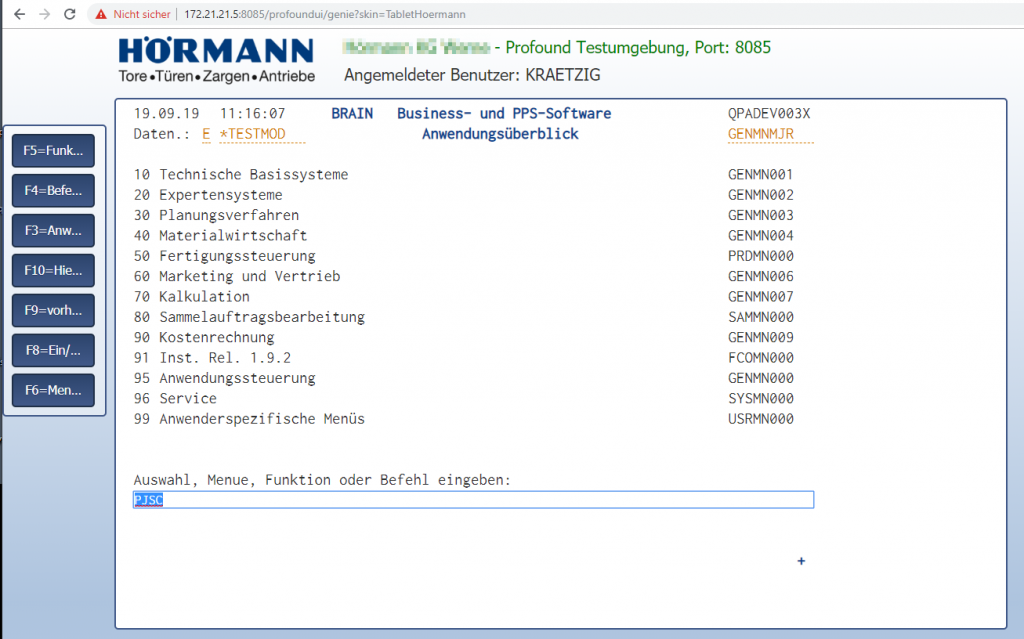 Initially, the ability to create Rich Displays using the Profound UI Profound Visual Designer was on hold due to Hörmann’s quest to find new, young personnel who were fluent in JavaScript, not RPG code. Their search wasn’t that difficult, as over 11 million developers worldwide currently use JavaScript!

A new colleague with a background in JavaScript and Node.js was soon found and joined the experienced RPG team.

With the introduction of the new technologies, the entire development team in Werne has stopped working with the traditional PDM tools and has been using the Eclipse-based development environment RDi ever since. This enabled the team to use more elegant and forward-looking tools for their projects, including plugins such as Open Source based iSphere (RDi Toolbox) and RapidFire (Promote Data Quickly. While RDi is the central focus of development, CMOne, Profound UI, and Profound.js are seamlessly integrated. These solutions enable the Hörmann team to convert old DDS files to modern SQL tables and transform fixed-format RPG code into more modern free format RPG. Additionally, Profound Logic converts traditional display filed into Rich Display Files which are supported in web browser-based GUIs.

One big advantage of Profound UI is that all components are stored directly on the IBM i in classical libraries and an instance is created for the integrated Apache web server in the IFS folder. There is no need to install any other components either on IBM i or on the client. All that is required on the client is any browser with a current release. All existing applications can be displayed unchanged via Genie in the browser.

Because of their interest in expanding their IBM i development to include Node.js, Profound.js is a perfect fit for Hörmann. Since Node.js is available on the IBM i since release V6R2M0 and since V7R1M0 is also available with Node.js version 8, JavaScript can now also be used elegantly on the server side. This is a very powerful development environment to integrate new technologies. Using the Node Package Manager (NPM) or Yum, finished packages such as Watson Visual Recognition, IoT or more than 1.1 million other packages can be integrated as Open Source on the IBM i.

“The integration of all components was very smooth and we were able to fall back on very competent and reliable partners. Today, our developers can react much faster and deliver better quality at the same time. We are well prepared for the future.”

After a short training and introduction phase of CMOne, Profound IU, and Profound.js, the work for new projects started directly. One example is their ‘Normzargen-Linie’ project. This project focuses on the generation of production-relevant data in real time. To monitor these new processes, a dashboard was developed which compiles all data in a graphical view and presents this to the users in a previously non-existent way. 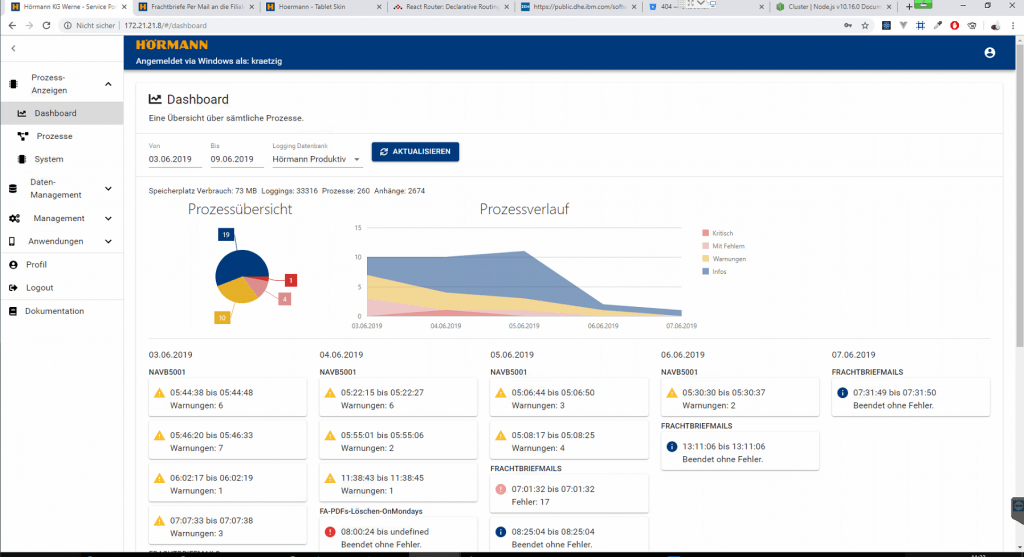 In the beginning, there were some small roadblocks with Node.js, but with the help of the Task Force and Profound Logic teams, these were soon ironed out. In fact, another programmer for JavaScript on IBM i has been hired and all programs for data generation in manufacturing processes will be completely implemented on this technology over the next 2 years.

IT Manager Jürgen Finger sums up the introduction as follows: “We have got our generation problem under control with the successful introduction of the Task Force modernization concept. The integration of all components was very smooth and we were able to fall back on very competent and reliable partners. Today, our developers can react much faster and deliver better quality at the same time. We are well prepared for the future”.

With the new, modern solutions in hand, Hörmann is confident that their developers can implement innovative solutions for the business for years to come.

Learn more about how companies like yours modernized their applications to innovate their businesses.